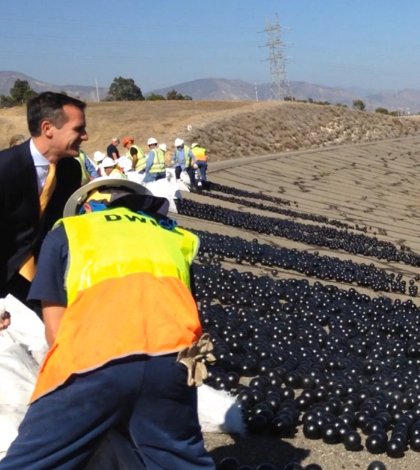 To help save water during the historic California drought, the Los Angeles Department of Water and Power released a total of 96 million shade balls into the 174-acre Los Angeles Reservoir. The final 20,000 shade balls were dropped on Monday, marking the completion of a $34.5 million initiative to protect the city’s water quality. The shade balls are 4-inches round and hold water in them. The water weighs down the ball and helps block out sunlight.

Sydney Chase, president of XavierC, designed the shade ball – or what she refers to as conservation balls. The idea behind the ball stemmed from the idea that they would keep the reservoirs clean, with fewer contaminants and toxins. The water is now protected from dust, birds and chemical reactions caused by the sun, in addition to the potential for evaporation.

“In addition to cutting back on the need to chemically treat our water to prevent natural occurrences like algae, these shade balls are a cost-effective way to reduce evaporation each year by nearly 300 million gallons, enough to provide drinking water for 8,100 people for a full year,” Councilmember Mitchell Englander said in a statement.

Los Angeles is the first city in the nation to use shade balls. Four of the city’s reservoirs now have shade balls protecting its water.

“This effort by the LADWP is emblematic of the kind of creative thinking we need to meet those challenges. Together, we’ve led the charge to cut our city’s water usage by 13 percent, and today we complete an infrastructure investment that saves our taxpayers millions and protects a vital source of drinking water for years to come,” Mayor Eric Garcetti said in a statement.

The EPA mandated that all reservoirs be covered. When the city began looking at options, the shade ball was their final decision. The shade balls cost 0.36 each – $35 million in total – to cover the reservoirs, a cheaper alternative than the $300 million estimated to cover just one of the facilities.

According to city officials, the shade balls will last about 10 years, at which point they will be recycled and replaced.