Claremont, CA has some 1,600 reasons to celebrate. That’s the number of previously drought-stressed trees that the city and a small army of volunteers were able to save last year despite California’s then five-year drought. The city is also celebrating recently being awarded the League of California cities 2016 Helen Putnam Award of Excellence in Environmental Planning and Environmental Outreach for saving those same trees.

Specifically, the city won the Putnam Award for its Tree Crisis Intervention and Outreach Program. The program, developed in summer 2015 sought to address the decline of the city’s urban forest from California’s relentless drought and the then 32 percent water cutback in Claremont as part of Gov. Jerry Brown’s statewide mandate.

Founded in 1887 and incorporated in 1907, the city has a long history with trees of many varieties. Early citrus ranching included vast groves of both lemon and orange trees. In 1888, Pomona College moved to acreage in the city and planted dozens of trees in hopes of providing shade for its students from the Inland Empire’s heat.

Known as the “City of trees and PH.D.s” Claremont’s city logo features only the word Claremont and the line drawing of a tree. Hence, when residents and tree preservationists declared a tree crisis in August 2015, the city and several organizations worked to assess and identify trees damaged by the drought and the water restrictions. Partnering with Inland Urban Forest Group, the city quickly identified slightly more than 1,600 trees as drought-stressed; 101 trees were critical. Additionally, 535 trees were identified as severely drought-stressed.

The city developed a plan, provided some $250,000 in funding and, with the assistance of volunteers from Tree Action Group, Tree Coalition and Claremont Heritage, began educating residents on tree watering techniques through person-to-person contact. Throughout the summer, staff and volunteers delivered watering toolkits to over 350 properties and over 500 trees. Toolkits included a soaker hose for each drought-stressed tree and educational materials on proper tree watering.

The program even went so far as earlier this month members of the city’s Brownie Girl Scout Troop 1924 volunteered to visit 300 properties to determine if the soaker hoses were being used and if the soil surrounding the tree was moist. Additionally, the city placed signage throughout the city’s medians briefly explaining that the city was working to save its trees while letting the grass in the medians die out.

Because of the success of the program, the city has lost less than one percent of its trees from drought stress. City Manager Tony Ramos has indicated that the Tree Crisis Intervention and Outreach Program has become a model for other cities.

Winners of the 2016 Helen Putnam Award of Excellence were announced at the California League of Cities annual conference in Long Beach. Twelve Excellence Awards were presented at this year’s conference in various categories.

Jennifer Quan, Regional Public Affairs Manager at the League of California Cities, presented the plaque to the City Council and the Tree Program volunteers at last week’s city council meeting. Quan said, “Claremont has long been known as the city of trees and the reputation remains intact with your new program. The mayor, council, staff and hundreds of volunteers should be commended for your leadership for instituting and continuing this program.” 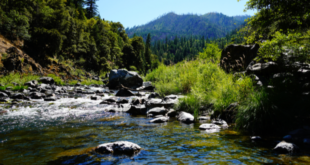 In response to continuing dry conditions in the Scott and Shasta Rivers, and a request …